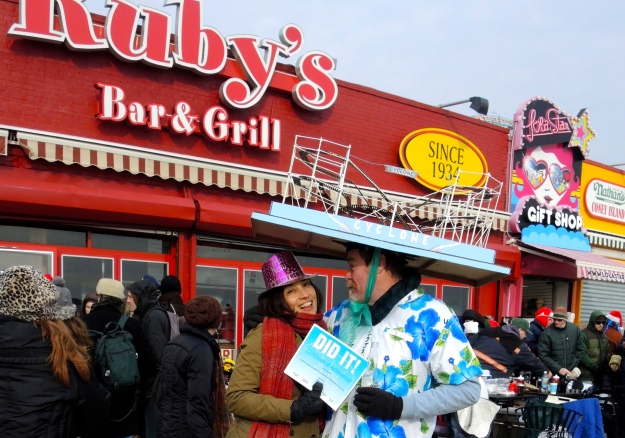 Happy New Year! I hope it’s off to an incredible start.

After writing my last post of 2013, I thought—what the hell, why watch from the sidelines of life? So I threw myself into the frigid waters of Coney Island with the Polar Bear Club and the rest of the freaky folks who greet the New Year boldly with a running leap. 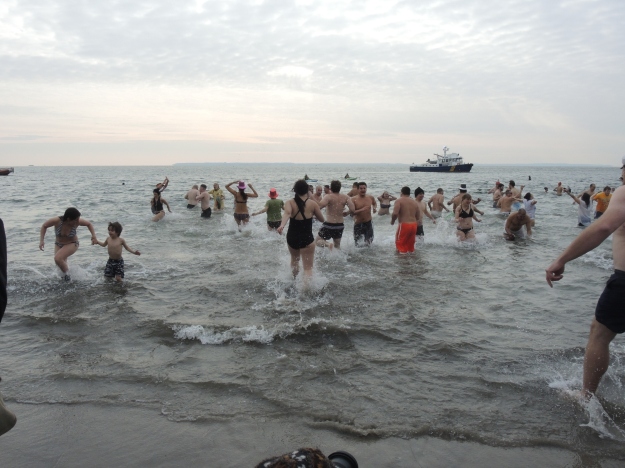 And you know what? It wasn’t so bad. In fact, it was downright exhilarating and it’s going down in my book as the best New Year’s Day ever. After a shot of Jameson at Ruby’s, I met a bunch of folks on the boardwalk and we warmed our bones by dancing the afternoon away. 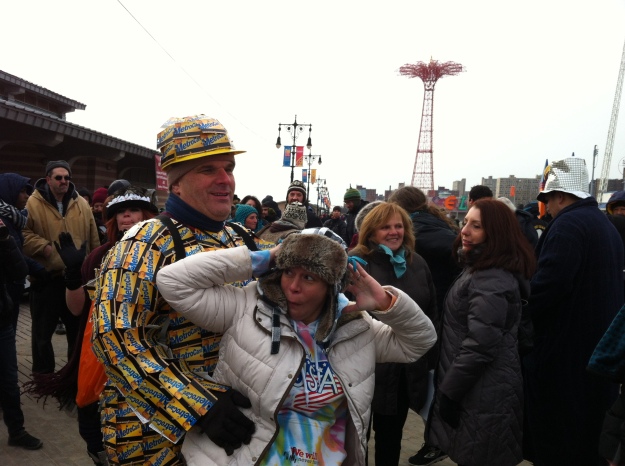 So I started a new tradition and have set my sights on living bravely in 2014. I’m adding new travel destinations and experiences to my list and I hope you are too.  But what was really great is that in taking part in the Coney Island Polar Bear Plunge, I raised money for charity and started the year off doing two great things.

Do you have any New Year traditions or travel any place special? If so, I’d love to hear about it. 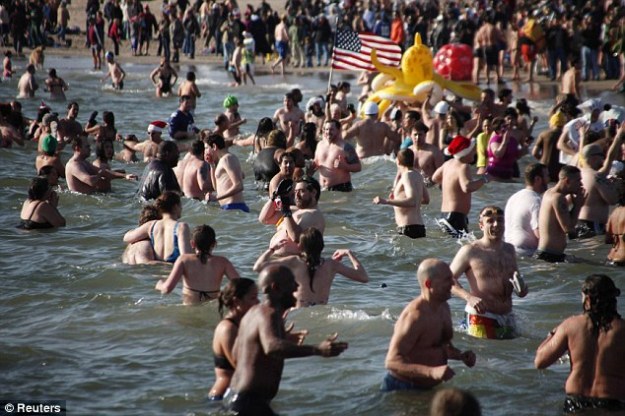 As you prepare to celebrate New Year’s Eve, I hope you can look back and see only good things behind you. And while the anticipation around this evening builds, I’ve come to relish New Year’s Day much more than the night before.

The reasons are obvious, of course—a new day, a new year. But the tradition of standing along the shoreline while close to 3,000 people hightail it towards the frigid waters of the Atlantic Ocean like they were being chased by the hounds of hell is a great metaphor for life. It’s resolution time. None of this sticking your toe in to test the icy waters of change—live bravely and dive right in. 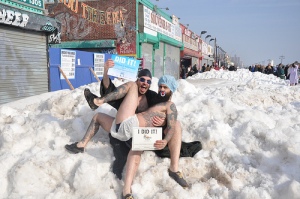 This year marks the 113th anniversary of the annual Coney Island Polar Bear Club Plunge and it’s a great reason not to sleep in.  For starters, it happens at the reasonable hour of 1:00pm, which gives you enough cushion to make yourself presentable or clear out a fuzzy head. Secondly, it gives you time to either knock up a killer breakfast or pop over to a local diner and start the year off right by treating your self to a good meal. But most importantly, it gets you outside in the salt sea air and deposits you in an energy field of kookiness and courage, with some folks dressed as mermaids, penguins, polar bears or big babies in diapers. Coney’s always let its freak flag fly and with temps forecast for the mid-20s on New Year’s Day, it seems fitting that this annual madness takes place there.

Polar bear plunges happen in Canada, the UK, Netherlands, and in a few more cities across the U.S. but I’m kind of proud of the one we’ve got here in Brooklyn. For starters, with almost every subway line throughout the boroughs barreling directly to Coney, or connecting to a train that does, it’s a destination that you can get to lickety-split. Once you arrive, just head towards the shoreline. You can’t miss it, or the massive crowd all bundled up and bracing themselves for what most folks consider sheer lunacy. People come from around the globe to take part in or witness the plunge.

Hubba-hubba — The Father of Physical Culture.

The club was founded in 1903 by Bernarr Macfadden, also knows as “The Father of Physical Culture.” He believed a dip in the ocean during the winter could be a boon to one’s stamina, virility and immunity. Considered a bit of a kook himself, he was the kind of person who made things happen. He constantly reinvented himself and in the process became a millionaire. He was also a writer and when he couldn’t get published he started a publishing company. The guy went on to become the most successful publisher of magazines in history. He also inspired people around the world to live healthy. It’s among that kind of spirit, and with that type of energy, that makes it a great way to start the year.

Standing there, you’ll also have a massive smile plastered on your face while you probably think, “better those nuts than me” and hear the screams from what’s on the other end of that running leap. But I don’t think they’re so nuts. Most of us have to be pushed to do something bold or to change. Being around loads of people who brave the freezing water and take that icy plunge inspires me to live on the edge of my comfort zone and stokes the philosophy to “just do it.”

If you’re anywhere throughout the five boroughs on New Year’s Day, wrap up, pack a thermos of hot cocoa or a flash of whiskey and consider coming out to Coney Island. It’s one big love fest and after the plunge the party carries on with the rhythmic beats of a DJ on the boardwalk at Stillwell. And don’t forget your camera.

If you’re going, let me know and maybe I’ll see you there.

Wherever you are in the world, I wish you a safe and Happy New Year!