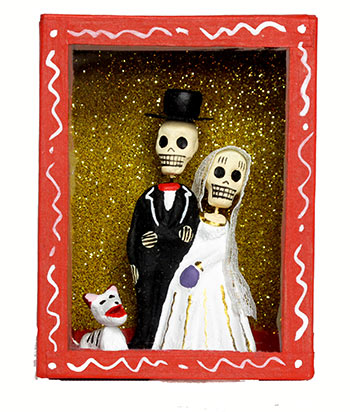 ‘Til death do us part. (Photo credit: VivaOaxaca)

“How do you say skeleton in Spanish?”

It was my first trip outside of the U.S.  I was 11 years old and sitting on the edge of my bed in the Camino Real Hotel in Mexico City watching cartoons. A kid was dancing with a chorus line of skeletons. Their bones rattled as they danced around. Intrigued, I asked my mom to translate for me. “El esqueleto,” she answered.

It was October. A time of year when Mexicans prepare to celebrate el Dia de los Muertos, or the Day of the Dead. From October 31-November 2, they gather to honor friends and family who’ve died. During this cultural celebration, each day has its own significance with lots of preparation leading up to it. In many homes, alters adorned with marigolds, incense, candles and candies are created. The belief is that during this time the gates of heaven open and spirits return to their loved ones.  It’s a reunion of sorts and families picnic in cemeteries.  Great festivities take place.  It’s even a bank holiday.  Sugar skulls, confectionary coffins and elaborately painted skeletons are also displayed.

Some people get a little freaked out by this idea. Not me. Raised on good, old-fashioned horror movies, many a night was spent huddled with my siblings on the couch with a fresh bowl of popcorn waiting for a ghoul to appear on the screen. I love this stuff and what kid doesn’t like sugar? Even more, I became fascinated with the little clay, hand painted skeleton figurines I’d glimpse around the town and in shop windows.

How sweet are these? (Photo credit: Examiner.com)

The only thing more enticing than exploring the Camino Real Hotel, with the scent of Mexican oregano and poblano chili drifting from its restaurant, was ogling the skeletons set up in various scenes of everyday life. A bride and groom, a cowboy on a horse, a few fellows playing pool, a guitar player. You name, they created it. Mexican art can be whimsical and playful, and its full wickedness appears in the Day of the Dead dioramas.

Must be the season of the witch. (Photo credit: ClayLindo) 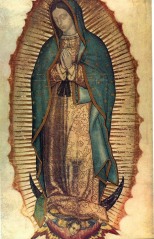 The apparition on the cloak of Juan Diego.

By day we explored the city and walked its streets. We visited the Basilica of Our Lady of Guadalupe where Mexicans and tourists made their way across the plaza to its doors upon their knees to honor her significance and gaze upon the cloak of Juan Diego that holds her image. We explored the National Museum of Anthropology in Chapultepec Park where I became intrigued by another relic, the Aztec Calendar with its secrets locked within its stone. Afterwards, we strolled around Chapultepec Park. With its forest and lakes, the park is an oasis in the city.

I was digging all the old stuff and don’t think my mom was thinking too clearly when she agreed to a visit to the Pyramid of the Sun. She booked us a tour and we took an early morning bus to the ancient city of Teotihuacán. When we arrived a local guide gave an orientation about the ruins, where 200,000 inhabitants vanished without a trace. Even today, they still don’t know how this place was built.  I was intrigued again. My mom on the other hand went a bit pale as she gazed up at the very steep, 250-step climb ahead of us. Had anyone else been with us, she probably would have bagged it. But seeing how it was just us, she boldly took the first step. “Don’t look down” became the mantra as I held her hand from time to time, and we ascended higher and higher. When we reached the top she was quite pleased with herself. We stayed there for a while, staring out across the land, wondering what life must have been like for the people who once lived there and where they went. Getting down the pyramid was a different story and a whole different mantra.

Don’t look down. Pyramid of the Sun, Teotihuacán.

On the way home the bus stopped along a market route where locals sold treasures made from famed Mexican silver. I’ve never seen so much silver in once place.   My mom bought me a bracelet. It was wide with cutouts and a detailed Aztec calendar intricately carved within its silver.  Decades later I sold it a stoop sale. What was I thinking?

But I still have the tiny skeleton figurines on my bedroom bureau. Like the Aztec Sun calendar, and the ruins of Teotihuacán, they remind me that everything changes and that everything can go poof in a second.

And this why we travel, right? To come outside of our own world, learn something new and, often times, something that makes sense. 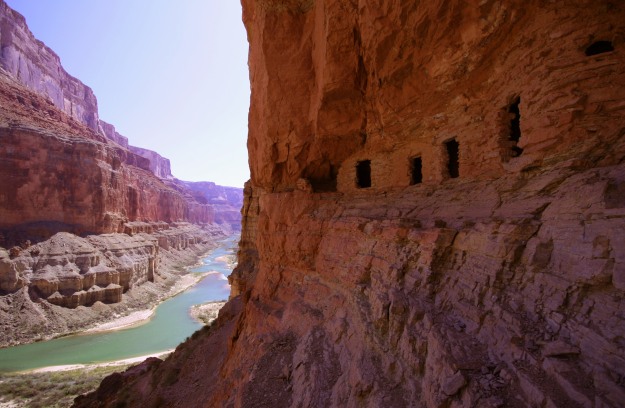 Nankoweap Rapid is mile 52 along the Colorado River.

If summer’s about escapism then autumn is all about back to business. But for many, fall is the time of the year when a lot of us hightail it out of here.   The crowds are gone, the roads are clearer and we can have places more to ourselves. But what’s travel without a good book? More specifically, without a good book about travel?

Depending on the direction you’re headed, some travelers prefer total immersion. And as most travelers know, any good travel tale is not without its fair share of ups and downs.  With that in mind, here are a few recommendations for all you travel advisors and travelers to inspire travel reading, travel writing, but mostly…travel.

I like a guy who likes to walk so I’m looking forward to The Old Ways: A Journey On Foot by Robert McFarlane. Shortlisted for the 2013 Warwick prize for literature makes it another good reason to pick it up. A literature professor, McFarlane leads us along the paths of the British Isles in England and Scotland, where he meets people and learns the history of these places. Step by step, he experiences the meditative bonus of walking, the thinking that goes with it and shares how exploring a country on foot is one of the best ways to enjoy travel. For anyone who’s hooked on their Kindle app and can’t get away, or for travel advisors who want to check things out, you can use Google Earth to track his path and see what he saw as you read along. Pretty cool.

“…the most important things in the world are the empty spaces,” writes Italo Calvino. In one way or another, the 38 essays that make up A Collection of Sand focus on Calvino’s visual experiences and how they inform travel. Around his pleasures and fascination of maps and books and how certain places, in this case Japan, Mexico and Iran led to contemplation on space and time and civilization. Beautiful writing.

Seems only fitting that since there’s a chill in the air that you should have something chilling in your hands, or on your iPad. In which case, The Robber of Memories: A River Journey Through Columbia may be right for you, especially if you’re heading in that direction. Michael Jacobs takes us with him on his adventure up Magdelena, a river that runs through the heart of Columbia where he charts its course geographically and emotionally. Like most first-world travelers who go it alone, he sheds himself of life’s modern comforts. His journey is challenging and dangerous but his tale, where South America is the central theme, serves up a different perspective altogether.

Egypt might not be the first place you think of going to these days but that doesn’t mean you can’t get a taste of what it once was. A long time ago, in a land far away, an old flame turned me on to The Alexandria Quartet by Lawrence Durrell and this masterpiece has stuck with me ever since. Made up of four small novels, it’s a lush and seductive tale of friends and lovers in Alexandria before WWI. Its central theme is love conveyed across the different viewpoints and experiences of the characters that make up these stories and whose common ground is the city.

Behind The Beautiful Forevers: Life, Death and Hope in a Mumbai Slum by Katherine Boo. I suppose the title pretty much sums up it up but don’t let that get you down. Boo won numerous book awards for this story and any traveler worth their salt knows that the closer to the bone you get to living in a country, the sweeter the meat. A journalist for the New Yorker, Boo takes us into the slum of Annawadi and its underworld of characters that make up the citizens who do what they can to make a life for themselves and their families who live on the other side of life in the shadows of shiny corporate hotels.

Another glimpse into the lives of others, The Urban Circus: Travels with Mexico’s Malabaristas by Catriona Rainsford takes you on a wild and wacky ride. Rainsford joined a group of young, itinerant street performers on a two-year journey across the country where she learned to live hand-to-mouth with them. If you’ve ever been to Mexico, this true story will give you a chance to see beyond the tourist zones and into the everyday lives, genuineness and character of Mexicans.

If you’re into adventure travel, or have customers who live for it, then this gripping and heart-stopping story is the perfect companion. The Emerald Mile: The Epic Story of the Fastest Ride in History through the Heart of the Grand Canyon by Kevin Fedarko is the harrowing tale of three guides who ride the Colorado River through the heart of the Canyon.  Check it out:

There’s loads of stuff out there. Are you reading any good travel stories these days, fiction or otherwise? Let me know, I’d love to hear about them.