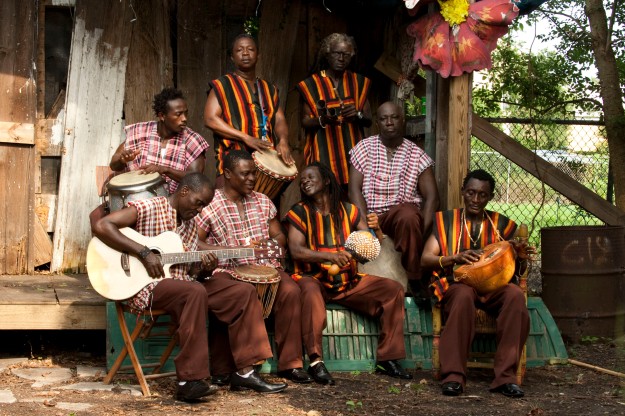 Music can heal the trauma of man.
— Jahson Gbassay Bull

Travel is wonderful but at some point you’ve got to go home.

Unless, that is, you can’t.

That is the fate of Sierra Leone’s Refugee All Stars.

If you’re not familiar with them, Sierra Leon’s Refugee All Stars are a band that was formed in the refugee camps of West Africa. Originally from Freetown, they, along with millions of others, were forced to flee their homes in the 1990s during a civil war in Sierra Leone that lasted a decade. In a crazy, shook up world, their story is incredible.

Born out of a situation you’d never hope to be in, instead of staying mired in hardship, these guys mined the power of connections and the indomitable nature of the human spirit. Music became their weapon, and from the dirt camps of Guinea they led a positive revolution. From international music festivals, to intimate venues, their uplifting sound and rousing energy inspires people around the planet.

Beloved for their joy and spirit, for the past year Sierra Leone’s Refugee All Stars have been celebrating their 10-year anniversary and the release of Libation, their fourth album, with a tour throughout Europe and the United States. It ended earlier this summer.

But once again, they can’t go home. They are cut off from their friends and families.

With Sierra Leone being one of the West African nations hit hardest by Ebola, recent reports list that more than 20 people a day are dying in that country from the virus. The limited amount of health care workers and hospital facilities make it impossible for everyone infected to get treatment, and all areas of the country have been impacted.

As the band takes shelter in the U.S., I was lucky enough to meet them when I booked them for an event in New York City. A gentle group, their feel-good sound immediately permeates a room, and it’s all peace, love, understanding, and connecting. They bring a sense of place with them, and for a little while it was Sierra Leone. With a bit of funk, a bit of reggae, and lot of West African soul, if you can’t chill to that, then you can’t chill.

I suspect that most of us don’t know what it’s like to live like a refugee but it can’t feel all that good. And while the U.S. isn’t the worse place in the world to be holed up, when a place isn’t your home, it isn’t your home. So they’re doing what they can by taking a bad situation and using it as an opportunity to raise money and awareness to help the people of Sierra Leone fight Ebola. As ambassadors for world peace, and with music as their arsenal, they continue to create goodness in an even crazier, shook up world.

The Sierra Leone Refugee All Stars are a generous group of men, so I’d like to use this opportunity to be an ambassador for them. With the holiday season upon us, I know there are plenty of parties being planned right now that are going to need music.  Not only will you have an internationally acclaimed band at your event that’ll get people on their feet, but you’ll also be helping them in their campaign to raise awareness. They can travel anywhere for a gig, except back home.

Unless you work for a humanitarian organization and volunteering to go in, travelers aren’t going to Sierra Leone. As the western world does the freak about the few Ebola cases that have touched their shores, the best thing we can do to stop its spread is to help eradicate this virus in the countries where it’s become an epidemic.  This is a collective endeavor.

So spread the word and spread good will. None of us may be traveling to Sierra Leone anytime soon but that doesn’t mean some of the best things about Sierra Leone can’t come to you.