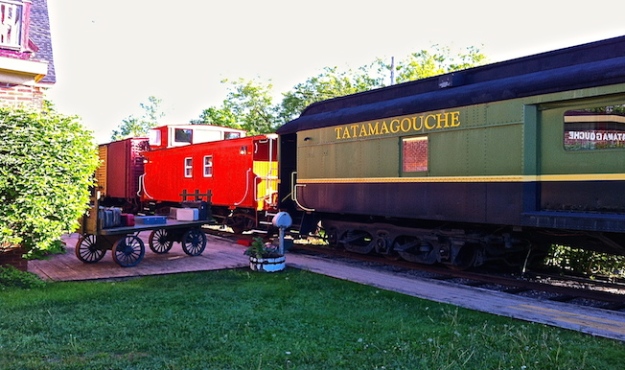 It felt like a scene out of a Wes Andersen movie when all of a sudden a slight man in a conductor’s uniform came zipping around the bend on an Ecoped, making a quick stop on the gravel road. In his blue uniform, matching hat, pocket watch and welcome smile he seemed too good to be true. Owner of the Train Station Inn, Jimmie LeFresne is the real deal.

Time well spent on the tracks, LeFresne turned his boyhood dream into reality.

A childhood spent playing in this Tatamagouche railroad station, one of the oldest in Canada, LeFresne turned his passion for trains into a hospitality reality. Back then the trains moved goods and services across the country; its stockyard was filled with pigs and cows. Times changed and it fell to ruin. To prevent its demolition, in 1974 LeFresne had the foresight, at 18, to purchase the station. In 1989 he opened the Train Station Inn, creating a love letter to a bygone era.

It’s not every night you get to sleep in a caboose; mine was bright orange with a small wooden patio added to one end. Investigating the authenticity of the existing apparatus within the car had me feeling like a kid.

Boxcar Jane is a sweet home away from home

Staying in boutique and luxury hotels is a treat but the Train Station Inn is an entirely different experience, more like a bucket list experience. Its uniqueness would appeal to friends looking for a special getaway, multi-generational family travelers, honeymooners, or couples in search of a memorable wedding destination.

Lunch and dinner is served in the dining car, where some of the good food you’ll eat comes right out of the Inn’s garden and from local farms and fishmongers. Ambassadors for keeping things local, they serve up organic and fair trade coffee and the next morning at the Jitney Café, a brick house that was once the men’s waiting room back in the day, a cup of it and a yummy breakfast of Orange Acadian Toast with maple syrup had my name on it.

Whet your whistle at the town’s newly opened brewery.

Situated along the Tatamagouche River, the Inn is walking distance to this community-driven town’s attractions. Travelers visit to experience its hospitality, museums, galleries, spiritual center, and an annual event like Oktoberfest. Located about 20 minutes from town, I popped into Jost Vineyards for one more taste of their fine Tidal Bay. It’s just one of the provinces many wineries.

Later, I stopped in Pugwash where I had a date for a game of disc golf. In the nearby town of Wallace, the Chip Ship  drew me in like bait and I pulled over to sample another tasty basket of fish and chips. Afterward, I slowly made my way back towards Halifax.

All aboard the Chip Ship for some good eats!

When I asked EatLikeALocal guide Monica MacNeil what the most significant thing is about Nova Scotia, she spoke for herself and on behalf of Nova Scotia’s tourism organization. “It’s the people,” she said. “It’s the history of the early Europeans and first peoples that we can trace our roots and origins through to today. That’s what continues to shape our hospitality, spirit and friendships.”

She also mentioned never being further than 40 minutes from the ocean, no matter where you are in Nova Scotia.

I do believe that has something to do with it.

For more information on planning your own Nova Scotia road trip to one of the province’s many shorelines, click here.