One of the largest squares on the planet awaits you in Isfahan, Iran. (Photo credit: Suzanne Anthony)

Forget safety.  Live where you fear to live.  Destroy your reputation.  Be notorious.
–Rumi

“That movie was not a fair portrayal of the Iranian people. Everyone in there was angry or had a sour look on their face.  They looked scary.”

I was playing catch up with my nomadic soul sister, Suzanne Anthony, and we were talking about the film Argo.  She’d been to Iran and I was curious to hear about it.  Like the tales of a 1,001 nights, she had me at headscarf.

During the US’ war on Iraq, one of the many casualties was the looting of its museums. Suzanne figured that with the drums of war banging away, it might not be long before Iran was in its crosshairs. She’d always had an itch to see Iran’s famous, hand-painted, blue-tiled, honeycombed mosques, and she figured it was time to scratch it.

The beauty of the blue and white tiled mosques. (Photo credit: Suzanne Anthony)

Suzanne’s a solo traveler but Americans aren’t allowed to travel to Iran alone. They have to go with a tour group. I had to admit, it’s not every day you see vacations to Iran marketed. “I don’t think it’s something the market will bear because people are terrified of going. It’s all fear. Look what happens when you tell people you’re going to Mexico,” she said. “The media doesn’t help.”

She got her visa and chose GAP, a Canadian tour company because the travelers they attract are younger and adventurous, more the backpacker type than the academic and older folks that book with US tours and do everything together. Her fellow travelers were Australian, Romanian and New Zealanders, and their Iranian tour guide allowed them to cut loose during the day.

She flew to Tehran alone but admits to being weirded out as the plane descended and a flight attendant announced, “By decree of Islamic law, all women must cover their heads.” Her nerves grew a bit more frazzled when she learned that US citizens must be fingerprinted. “The first thing the immigration guy said to me was, ‘Welcome, welcome! I love America. USA good. Welcome.’ He could barely speak English but he could tell I was nervous,” Suzanne said. From that point on, the little fear she had disappeared.

A big attraction traveler, Suzanne went for those blue-tiled mosques but what the attraction became when she arrived were the people. “It’s a very young group. They work very hard to let you know that they’re cultured. So they always want to talk about music and poetry. The Persian poets like Rumi from old Persia.” Music’s important too but Western music is stifled. She told of guys dressed like punk rockers in skinny jeans with spiked hair. Of one listening to his iPhone who asked her, “Do you like rock n roll?” She replied, “Yes, I love rock n roll.” He got wide-eyed and whispered, “I do too but here it is forbidden.”

And what about those headscarves?

“It was funny for me that the headscarf is a very powerful symbol that people fear. Women are asked to take them off in the US and women are asked to put them on there. We’re so focused on the power of a headscarf.” She remembers a gorgeous woman who stopped to ask her what she thought about wearing the headscarf and she answered, “I respect your customs and I’m willing to do it to visit your country. What do you think about it?” The woman wore a purple scarf, tossed it over her shoulder and said, “My god does not care about such things.”

On a visit to the holy city of Mashhad, all the women on the tour had to sport a chador, the black robe that covers you from head to toe. A bit freaky at first, they got over that feeling quickly when the Iranians looked at them and giggled. Blending in among a sea of black was an experience Suzanne had never had. She felt a huge energy shift. “All of a sudden you’re one of them now. You’re not the lone vanilla scoop in a chocolate sundae. You’re swept up in that mystique.”

The hospitality also blew her away. “They’d say, ‘Can you come to my house for tea?’ The whole Muslim culture is very much based around hospitality, that if you have a guest in your country it’s considered a gift. You’re considered a guest of honor.” These aren’t things we hear about in the media. Suzanne constantly met people throughout the towns she visited who’d say to her, “America very good.”

They’d also ask a lot of questions but there was one in particular that gave her a lump in her throat. “What does America think about us?”

She went for the blue mosques but found so much more. (Photo credit: Suzanne Anthony)

Isfahan, with one of the largest squares in the world and a UNESCO World Heritage site, was her favorite city. Travelers flock there for the Iranian and Islamic architecture, art, history, and parkland. But it was the blue mosques that she couldn’t wait to see. “I’m just crazy about those because you go inside these mosques and the ceiling’s are all honeycombed. Just to walk through a giant mosque and have every surface around you in these blue and white tiles is just beautiful. I couldn’t seem to get enough of those.” She came to feel the same way for the mirrored mosques. She also fell in love with the city of Shiraz with its poets’ shrines.

They visited a caravanserai, a sort of open-air dinner theatre in the desert. It turned into a wild and memorable experience when an Iranian tour group arrived and threw the party of all parties. “They threw upon the doors and dragged us into their party. Before you know it, we were all dancing. It was wild, the headscarves started to loosen and come off and everybody was on the dance floor. As quick as they blew in on their tour bus, they were gone and we were all stupefied. It was like prohibition. Here they were out in the desert and they were breaking all the rules.”

Suzanne thinks it would be an amazing thing for more Americans to visit Iran. Why? Because she thinks if you open up your mind and your heart, it’ll be an enriching experience like no other. “I was relieved to not have everybody be right who thought something bad was going to happen to me there,” she said. “Don’t be afraid of what you don’t know. Go and see it for yourself.” Another plus, women don’t have to pack much because nobody’s really going to see you! 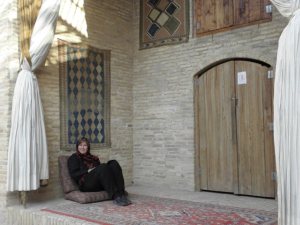 My nomadic soul sister, Suzanne, chills at the caravanserai.

I’ve barely scratched the surfaced here. Visit Take To The Highway to get all the details behind Suzanne’s incredible journey in Iran and to follow her other trails.