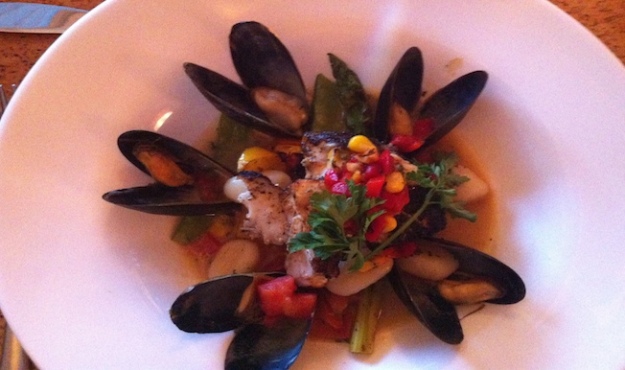 The charming town of Antigonish is a great base for day tripping to points of interests along the Northumberland Shoreline and some of Nova Scotia’s other shore areas.

Some travelers dislike staying in B&Bs, and I get it, but the Antigonish Victorian Inn might change your mind. Set amongst four acres of farmland, each room in this heritage house is well-appointed with comfy beds, curtains that keep the morning light at bay, free wi-fi and cable. Rates are wallet-friendly and the Inn has welcomed visitors from dignitaries to international travelers, so they know what they’re doing.

Easy to get around, Antigonish has pretty much everything you need on its main street.

A road buddy scored a tiny rose gold teacup on a chain at Aphrodite; a boutique that carries locally sourced fashion, art and jewelry. Now in its 7th year, there’s an International Film Festival held here each October. Antigonish is also known for its beloved St. Francis University, July’s highland games that celebrate Scottish sports and music, its access to outdoor activities, and…beaches. But the only dipping tonight would be at Gabrieau’s, one of the regions most coveted restaurants.

The co-op movement began in Antigonish in 1861 and Chef Mark Gabrieau is proud to be part of its enduring legacy. He tills his own parcel of land on a co-op acreage where he grows seasonal fruits and vegetables that make their way onto his menu. A proud ambassador for Nova Scotia’s food movement, he’s won numerous awards, including the 2013 Taste of Nova Scotia Prestige Award for Restaurant of the Year.

The province’s lighthouses have their own draw.

For anyone remotely interested in where their food comes from, Nova Scotia’s cuisine is heavily influenced by the land and sea. Whether it was breakfast, lunch or dinner, a majority of the food I ate was locally sourced, meaning profits go back into the community. With tourism being such an integral part of the province’s revenue, it’s yet another good reason to return.

The next morning a stroll through the Antigonish Landing Trail, a wildlife sanctuary for birds and a local hiking and kayaking spot, was the perfect way to start the day before hitting the road.

Next Stop:  Finding my way around a lobster.

2 thoughts on “Discovering Nova Scotia: Part 3–No Time Like the Maritime”